This shop has been compensated by Collective Bias, Inc. and its advertiser. All opinions are mine alone.  #BakeItYourself #CollectiveBias #HomemadeCinnamonRolls #HomemadeBaking #BakeFromScratch 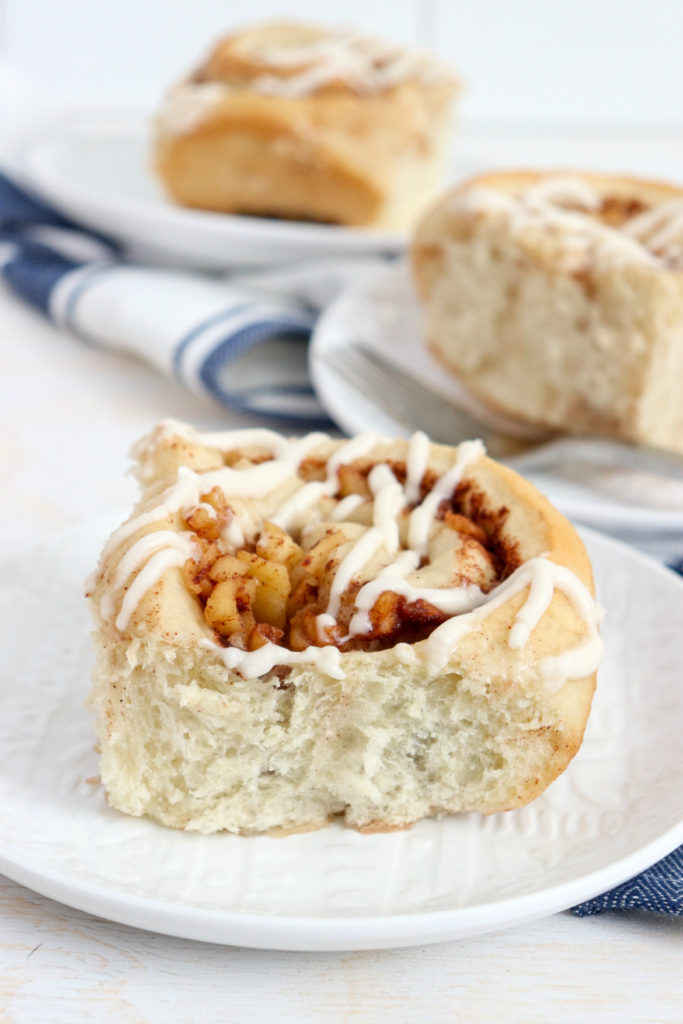 If you know me, then you know my favorite flavor is cinnamon. That makes cinnamon rolls my favorite of all baked goods – especially when they are homemade from my very own kitchen. Nothing beats homemade, right? There’s just something so satisfying about going through the process to bake something so delicious and getting to sit down and enjoy it with your loved ones. I am so excited to share these Apple Pie Cinnamon Rolls with you, but first, I have a little secret that I want to share. It’s what takes my homemade baked treats (like these cinnamon rolls) to the next level! 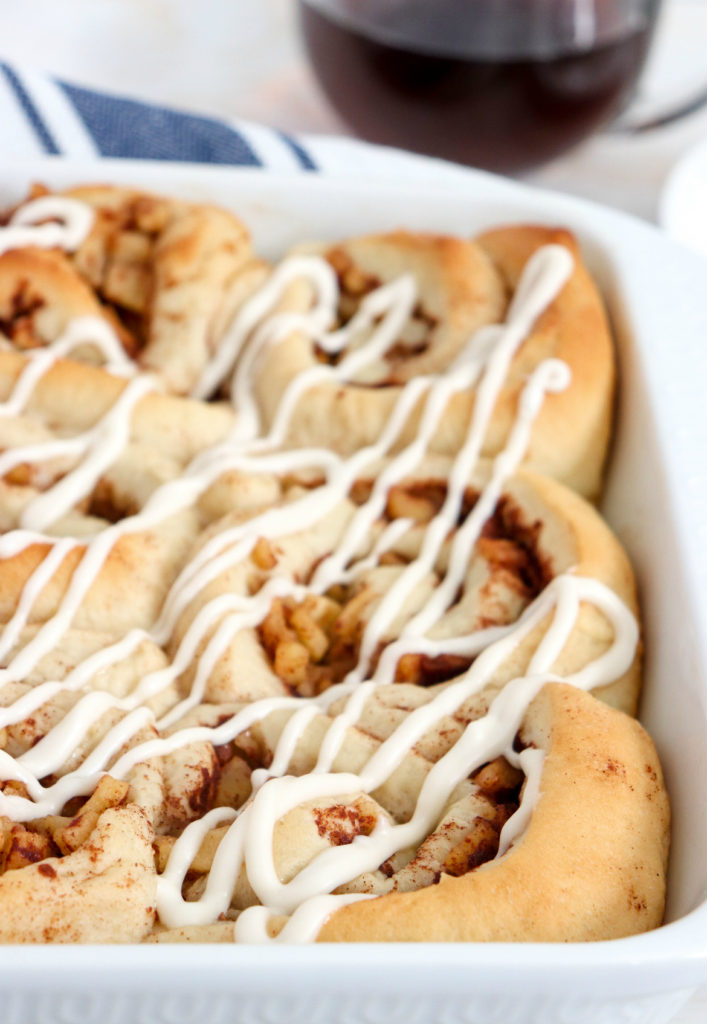 I remember the first time I baked a recipe that called for yeast. I was initially intimidated by the concept of using yeast, but Fleischmann’s® RapidRise® Yeast is so easy to use. Now it’s the only yeast I use when baking. It makes high quality homemade recipes taste amazing and makes baking enjoyable. Speaking of taste, the taste of baked goods made with Fleischmann’s® RapidRise® Yeast is what I value the most. It’s unbeatable!

Long story, short..if you’re new to yeast or a baking veteran, Fleischmann’s® RapidRise® Yeast is the way to go.

Baking with Fleischmann’s® RapidRise® Yeast strengthens the dough. From mixing, to kneading, to rising, to baking, it’s important to have a quality yeast mixed in with your other ingredients to give you the rise and volume you need for a delicious dough made from scratch. 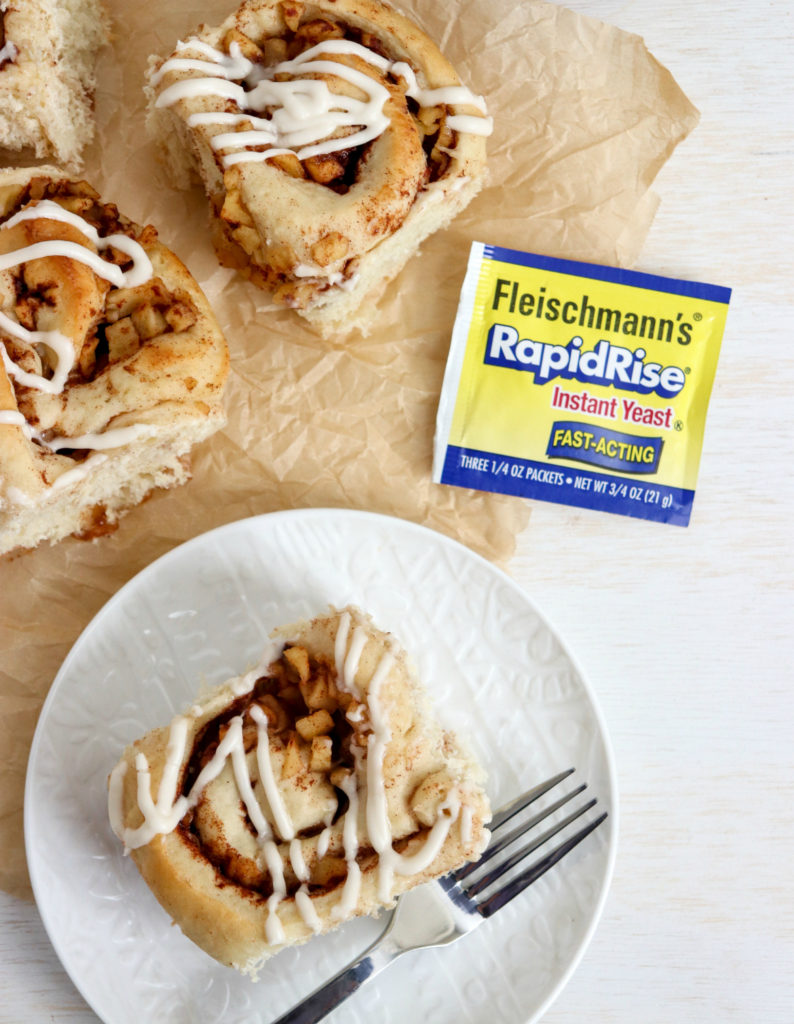 Are you ready to talk Apple Pie Cinnamon Rolls? It’s like apple pie in every swirl. Let’s get started!

*This recipe uses Fleischmann’s Beginner’s Frosted Cinnamon Rolls® the base.

The yeast comes into play from the get-go when you start by mixing your dough ingredients. In a large mixing bowl, add your dry ingredients per the exact instructions in the full recipe below. This is followed by your wet ingredients.

Once wet ingredients have been mixed with the dry ingredients to from a sticky ball of dough, and dough has been kneaded for several minutes, it’s time to let the dough rest. I placed my dough in a medium mixing bowl then covered with a towel to rise for 10 minutes. Here’s what it should look like after it rests. 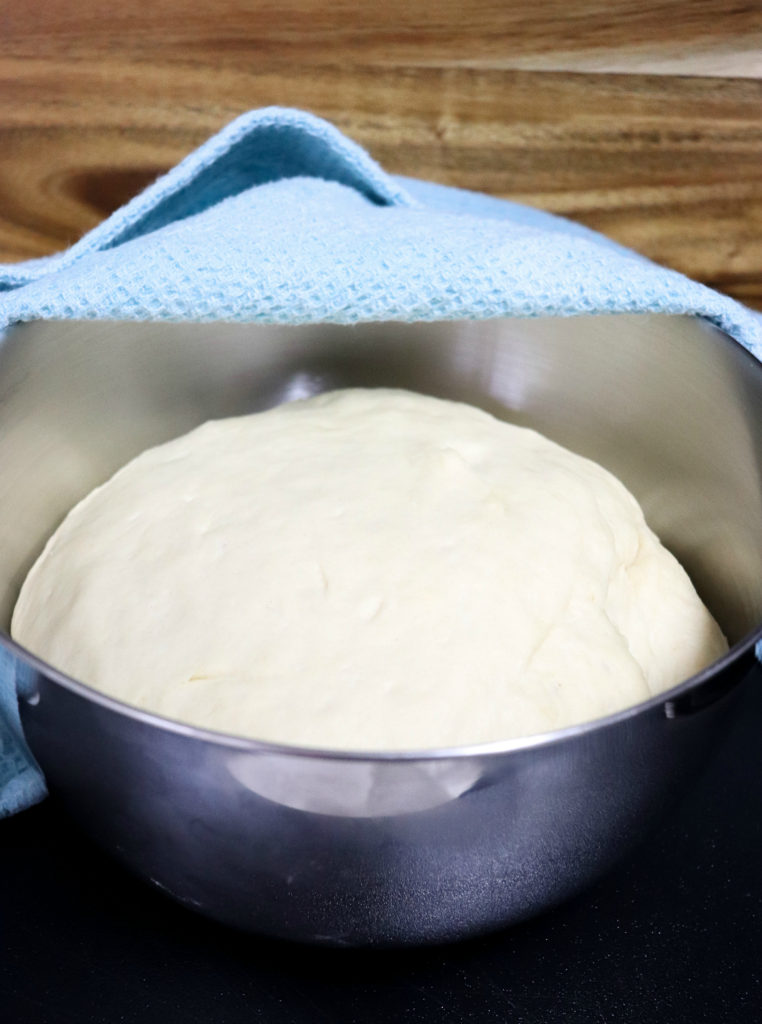 So far, so easy, right?! I told you there was no reason to be intimidated by yeast. Let’s continue..

Now it’s time to begin our filling. After all, no good cinnamon roll is complete without an epic filling. While the dough rests, take your Honeycrisp apples and remove the cores, peel and finely dice them. I prefer to bake with Honeycrisp in most of my recipes with apples because of their sweet, yet tart flavor. Other apples that are great for baking include, Braeburn, Jonagold and Granny Smith.

Melt butter in a medium skillet over medium heat, then cook apples. Add cinnamon and brown sugar to carmelize the apples as pictured, then set aside to cool. To complete the filling mixtures, combine remaining cinnamon and sugar in a small mixing bowl, then set aside. 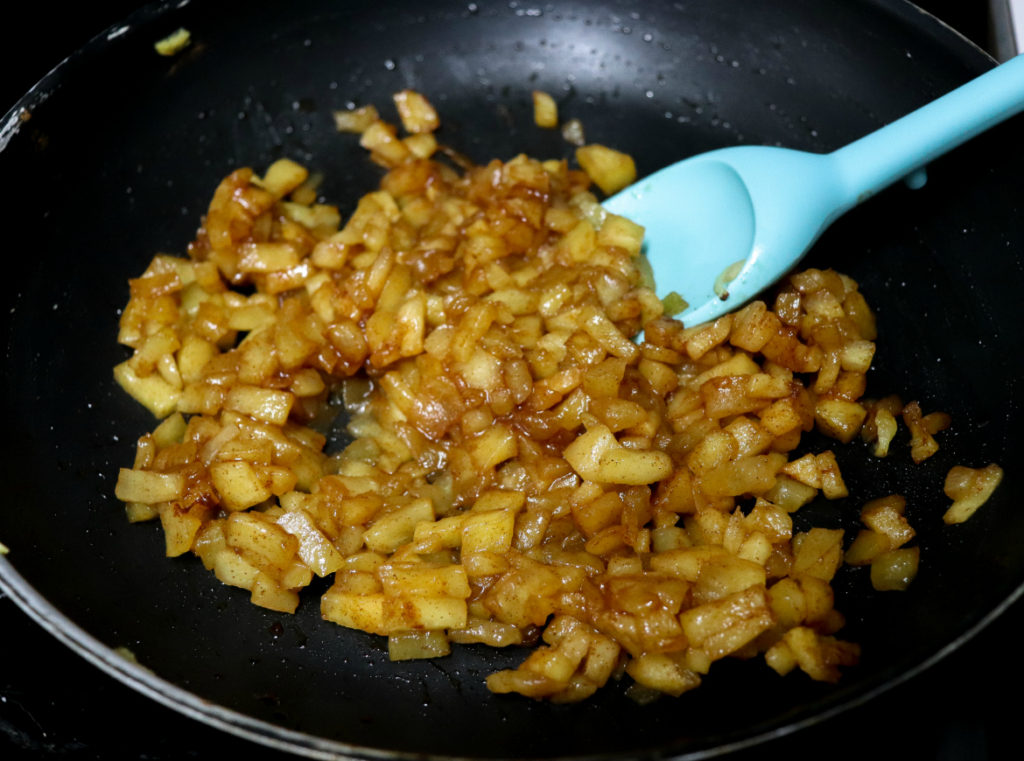 Now your dough has had time to rest and it’s time to prep it for the next step. Here you will be rolling your dough into a 15” x 10” rectangle. Tip: I recommend rolling out your dough on parchment paper with measurements that you have previously marked with a ruler. Next sprinkle your cinnamon sugar mixture, then apples over top the dough. 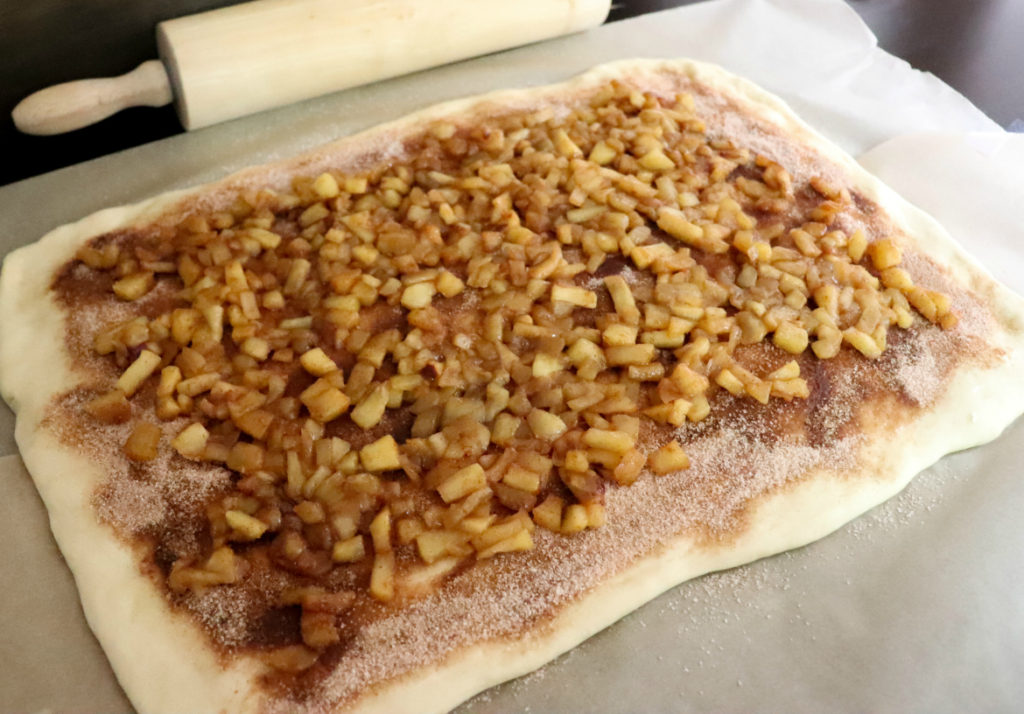 It’s time to roll the dough as tight as possible, then cut them into 12 even slices. You can use a knife or the (unflavored) floss method.  Place each slice into a greased 13” x 9” baking pan. Then you will cover the rolls again with a towel and set them on the counter to rise for 1 hour. In this time, the rolls should double in size.

Next, it’s time to bake! In a preheated 350 degree F oven, bake rolls (uncovered) for 25-30 minutes or until golden brown. Remove from oven and allow to cool for 20 minutes.

Finally, while rolls cool, combine all frosting ingredients in a medium mixing bowl. Beat until creamy and drizzle over top rolls. 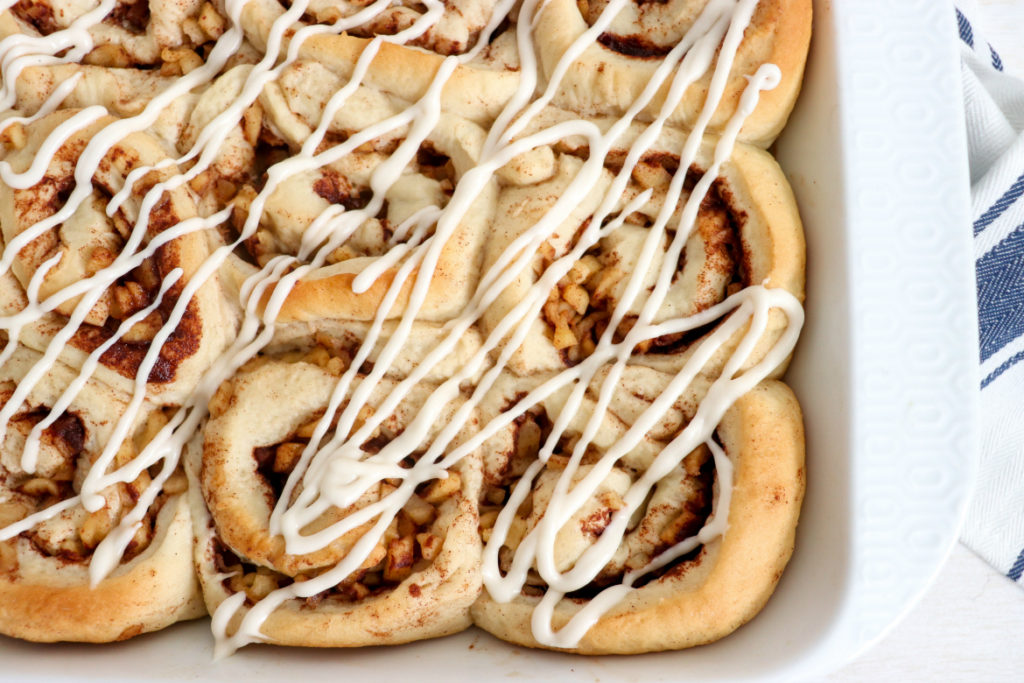 I hope next time you want to tackle a homemade recipe like pizza dough, dinner rolls or these delicious cinnamon rolls, you remember just how simple (and fun) it is to use Fleischmann’s® RapidRise® Yeast. When you taste these Apple Pie Cinnamon Rolls, you’ll know why! 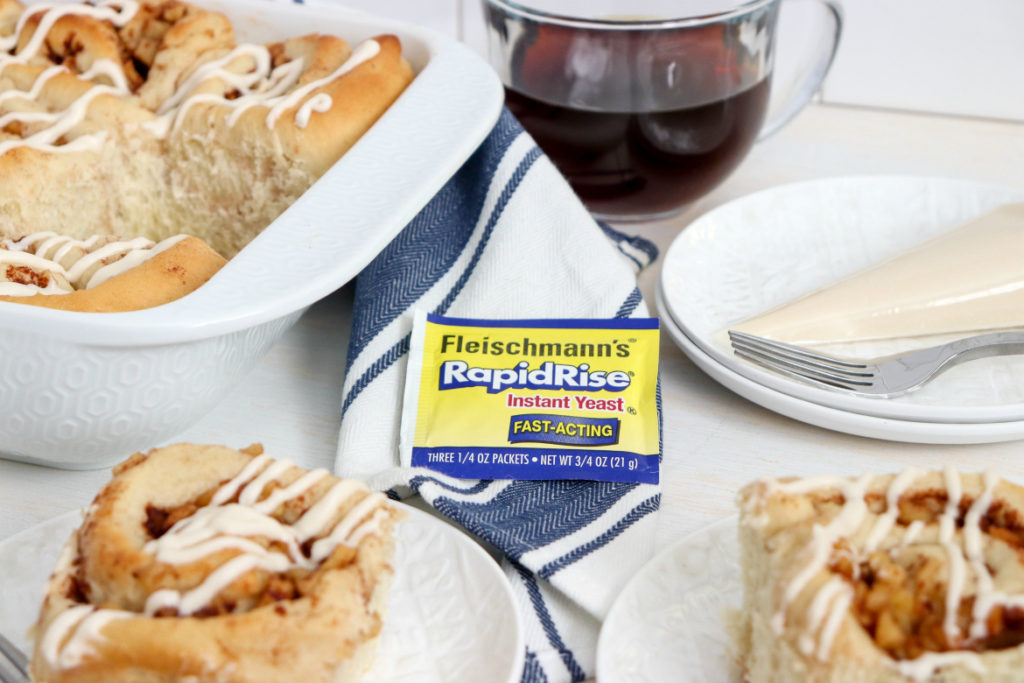 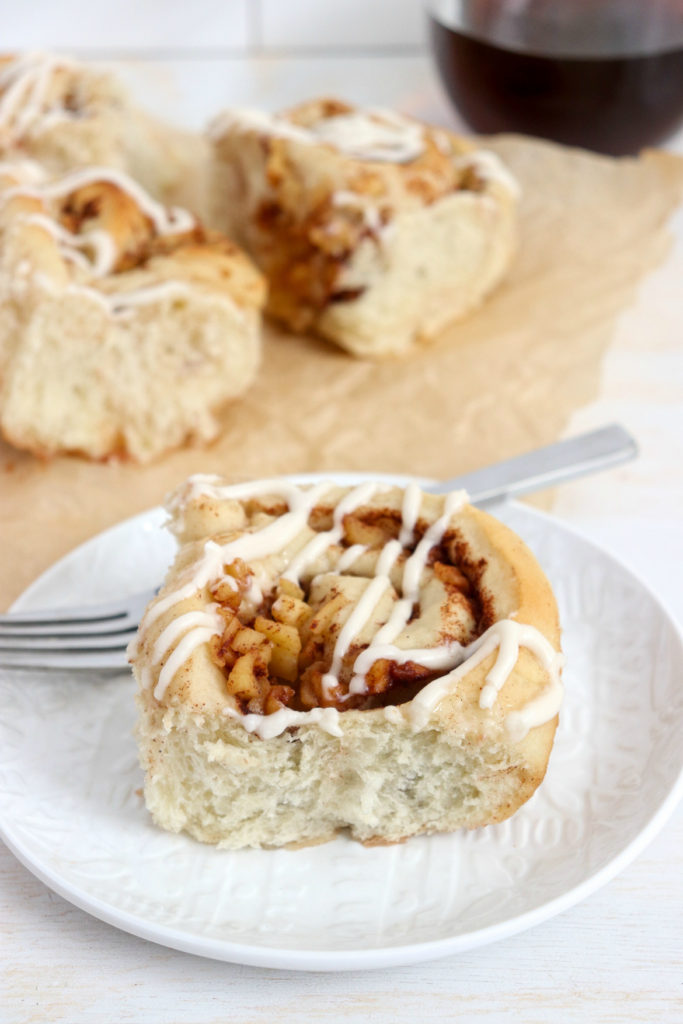 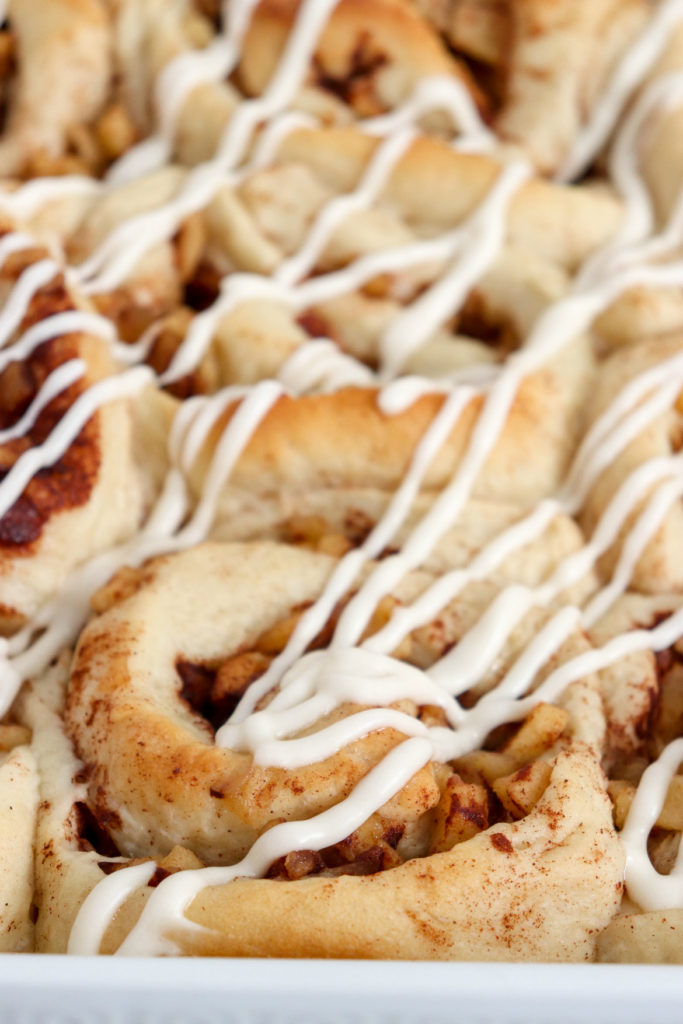